Last night I walked into the house (I.e, work), and saw the printed paper I’ve been waiting to see: the “Fuck ICE” paper. 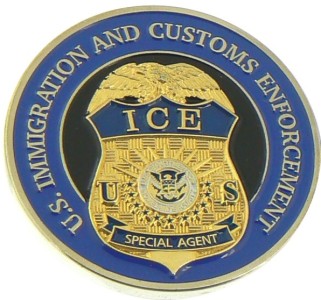 It didn’t actually say that, but that’s how I like to think of it. ICE, if you didn’t know, and if you couldn’t tell from the picture above, are the Immigration officers here in the United States. There’s a man who works for them who lives in my apartment complex. My mostly hispanic apartment complex. Hmm.

Anyway, the point of the paper was to remind us all of confidentiality rules. That is, if ICE officers bang on the door and want to search the house, we immediately need to ask for a warrant. Repeatedly, if needed. If the warrant is signed by a judge, and once we’ve read the criteria, we let them in. If they don’t have a warrant, or the warrant isn’t signed by a judge, we stand our ground at the door. If they call looking for specific people, we say “I’m not your puppet, Master.”

You probably shouldn’t say that, but that’s what I’d say. And then I’d hang up.

No, fuck it, that’s what you should say. Fuck it.

Like I said in my conversation this morning before I left the house: I expected Trump to get assassinated on Inauguration day. I’m still convinced the CIA is planning his assassination, too. Or aliens are going to abduct him and put him on display in an alien zoo to showcase what Earth (pronounced Ee-Arr-th) has to offer. And that’s when we all die. I bet Nostradamus predicted it.

What hasn’t Nostradamus predicted, I mean, Come on.

I’ve written an article prompting the deportation of Mike Pence here. Have a read. It’s short. And #DeportMikePence. #I’mNotYourPuppet.

I’m sick of people calling people who feel like they’re being watched, judged, and spied on by the government “paranoid”. That’s not fucking illogical paranoia, wake up! Look who’s in office! There was a huge raid just a few nights ago in my town. One was right across the street from my apartment, the other was downtown near my boyfriend’s house. ICE and homeland security and the local police department. “Gangs” they claimed, but not really. I’m sure all the people they arrested won’t be coming home any time soon, and it won’t be because of prison time.

I haven’t been sleeping again, can you tell? I think all that medication is completely out of my system. I’m supposed to see that psychiatrist on the 20th, but I’m not going. I’m tired, but I’m funny again. So, you know, pick and choose your battles people, that’s a good life lesson. R Kelly taught me that.

I sleep maybe four hours a night. I go to bed around 3 or 4, wake up around 7 or 7:30. Without fail. Either at my apartment or at the house. I’m tired and distracted and pretty sure I’ve been contacted by Aliens the last few nights, but it’s all good because I’m also more evolved than the average human being, or so they said. Maybe that’s my inner arrogance coming out.