It’s not often I share a portion of my creative writing on this blog, but I feel like I might as well, it might help me get back in the groove of writing. I also don’t write poems often, nor do I ever follow any forms of poetry when I do write them (so cut me some slack on that, poetry fanatics) but here’s a poem I wrote last night just freely, without restriction or editing. I posted it on Booksie, along with the one following it, but would like to put it here as well. I’m changing the title to: “Veiled”

The truth has thorns,

and the darkness has arms;

We move along this common ground,

a soup of emotions, ready to blow.

The nature of progression pushes us forward;

we move silently through strife,

and why, who knows.

Plant our feet carefully between mines

we know are there yet we cannot see,

and be, we try, with ourselves,

however bitter that may seem.

We come across a stream that flows free,

how we wish we could be,

with a purpose dear,

and we envy the stream.

But free we are in the mind and heart,

as the stream can never be,

rejoice, I say, for we are unique.

the darkness has arms,

and we have voice.

This one is entitled “Freedom”.

A renewing of strength,

I stretch my fingers, crack my neck,

I feel I haven’t lived for years.

and I wonder how long this will last,

this time I know this is real.

trees dance in the breeze,

and I observe it all,

A renewing of strength,

a bubbling pot on the stove not contained by any lid,

in its purest form,

a feeling unmatched by others,

but envied by them.

it makes you harmonious

A trick only freedom can do,

this renewal of strength.

Let me know what you think.

In yesterday’s post, I established my footing in why constantly seeking control in a world powered by chaos effectively leads to a vain existence. Today I will establish my footing in why we are only as free as our most oppressed members of society.

My heart lies with many societies with factions of people held down under tyranny and dictatorship and religious ideologies that restrict general rights. Being that I consider myself a mental health blogger, I’d like to talk specifically about stigmas and the oppression those of us with such issues might encounter.

Let’s just not forget there are people out there in the world suffering through levels of oppression that keep them from simply having a life.

At any rate, stigma is a huge topic these last few years. Everyone is gunning for the big guys: the media that shows serial killers with voices in their head, or the OCD Target sweater scandal, e.t.c. I’ve advocated for a few years now that rather than force people to view us as regular people, we should group together, support each other, and show them that we’re just regular people wanting just as much respect and trust as any other human being.

My view today is no different. It was, however, squashed a bit today. I want to give my apologies beforehand out to the mental health community, my peers, as I’ve let us all down a bit today.

Walking through a market my boyfriend and I were mesmerized by some gift boxes and sets. I ran off towards the candles and soaps which I often sniff until I get a headache, and he bolted off with his eyes on the gift baskets of food and popcorn and hot sauce. As we walked side by side, a woman in the aisle over stood with another man. He was slender, tall, dark hair, but very pale and skittish. He held behind him one of the market baskets. The woman seemed boisterous, an attitude mirrored by the frizz in her hair.

Suddenly she blurted words from her mouth that I didn’t catch over the music of the market. She then spun, faced the man, and shouted very blatantly: “No! You have a MENTAL DISORDER, you don’t think right!”

There were a few words after that crucial line I didn’t catch. My boyfriend and I stared at each other. The man she’d shouted at muttered a tentative “oh”. He fiddled with the basket in his hands. By the time we turned around the aisle, they’d wandered off.

I watched her across the store floor. She talked and talked. The man followed, silent, carrying the basket. I couldn’t guess their relation or age if I tried; it didn’t matter anyhow.

Driving away, my boyfriend and I both agreed we should have spoken up. I’m not sure why he felt he didn’t, but as I drove home I thought heavily on why I didn’t. I’ve spoken up in situations like that before. I’ve stopped to help strangers and I always say hello to the people in society others won’t make eye contact with.

But for some reason I froze in this situation, and I believe it has much to do with being used to the abuse. I’m used to people thinking the way that woman thinks: you have mental issues, you can’t do things normally. I’m even used to myself telling myself those words.

And the more I came to this realization, the more I regretted my silence. He needed support. He needed a reminder that words like that were opinion and not truth. He needed someone in his corner in a world where many people are in the corner of the woman.

He was oppressed by a simple sentence, and in turn I was as well; he wasn’t free so I couldn’t be free. That’s how my subconscious reacted in the moment.

I don’t like playing by the rules of the bystander effect. I never have in the past and now that I have, I feel filthy for it. I don’t think I’ll ever do it again.

As I always have, and always will, I encourage you: we’re all in this together. Don’t freeze like me. If someone speaks to you in a manner as blatantly (or subtly) disrespectful as that woman did because of a mental health struggle, a physical health struggle, your religious preference, your attire, whatever is a part of you, don’t mutter “oh”. Don’t fiddle. And remember, an opinion is an opinion. No matter how many times people beat you with words, you can always beat them back with class and intelligence; chances are if they’re using a bunch of words to hurt, they don’t understand the magic of language and in my book if you don’t understand the magic of language then there’s probably a lot of other things your small brain can’t understand.

If you see someone being obviously verbally/mentally abused or disrespected, forget the weird notion that “it’s not your business”. Allowing someone to be hurt in any way possible means you’d be willing to let yourself be hurt in the same way–would you? If not, than it is your business. Not your obligation of course, by all means take out your cell phone and post a video to Facebook. You might go viral and get on the news and everyone will treat you as a hero instead of a bystander.

As for me, I won’t step back next time, particularly for my peers who I care deeply about.

We’re only as free as our most oppressed members of society. 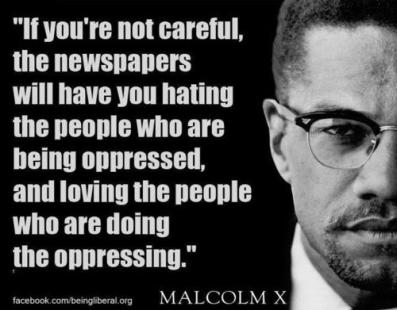