There is one thing that worries me about legalized Marijuana, and it has absolutely nothing to do with stoned drivers.

It has nothing to do with smoked out streets or “bud and breakfast” hotels or that it’s a “drug”. And I use the term drug loosely, just as I’d use it loosely for every other plant on earth that’s been used by indigenous tribes for ten times more years than the country of America has existed.

The thing that worries me about legalized Marijuana is . . . Lithium.

Let me connect the loose dots on this one for you.

Lithium is a mineral. It’s a mineral that isn’t necessary for life. It’s soft. It’s a silver-white color. As a metal, it gets an attitude around water and oxygen. There’s Lithium Carbonate, Lithium Hydroxide, Lithium Sterate, Lithium Chloride, Lithium Metal, e.t.c. It’s used in battery cathodes, as High-temp lubricant, in glassware, in ceramics, and in your air conditioner.

Along came the 1800’s and the discovery that Lithium Carbonate dissolved stones of urate (i.e, uric acid build ups which cause The Kings Disease, i.e, Gout and Kidney Stones). Urate imbalances were thought to be in cahoots with Mania and Depression. And there the loose dots were connected.

People were drinking traces of it in their water, because it’s a mineral, it’s good for you. It was like the opposite of today’s gluten craze. When a tablet form came along as a salt-substitute for people, that’s when the deaths started.

John Cade treated people with Lithium in the 1940’s only after injecting it into guinea pigs to find they became so sedated he could poke them onto their sides. His first patient was not himself, I don’t know where that rumor comes from, but it was a man who was in and out of what they called psychosis back then. On Lithium, the man went from the asylum, back to work, and back to life. It was a miracle.

Now it’s a wide-spread medication for the treatment of this human bipolarity and despite the knowledge of its toxicity, people are kept on it continuously until, well, their liver needs monitoring and their kidneys need replacing.

Marijuana is a plant. It grows in the dirt and high heat. It’s a plant that isn’t necessary for life. It’s different shades of green most commonly, in the absence of additives. After bud is plucked, at different heats there are different medical benefits, both mental and physical, including (but not limited to), lower blood pressure, lowered stress/cortisol, anti-inflammatory properties, and an anxiolytic. It’s used as/in wax concentrate, oils, shatter, crumble, flower, lotion, lip balm, chocolates, hair products, other skin products, gummy candy, lollipops, and supplement tablets.

Along came the radicals pushing for the medicinal properties of marijuana to be recognized, and so they were–in a few places, at least. Cancer patients, people going through Chemo, people with severe pain, people with children struggling with severe Autism, found marijuana more helpful than prescription drugs.

Marijuana is a drug, Lithium Carbonate is a medication. Doesn’t seem right, eh?

I mean, what’s the difference between the stupor of high levels of lithium and the stupor of a little bit of heroin? The Opiate debate, there’s a whole other story. 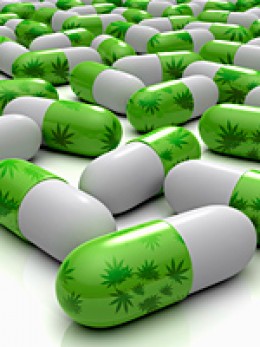 I don’t know. I don’t know how I feel about this because if Marijuana is a medication than someone has the rights to that medication–or, at least, the will soon enough. Having a recreational store and a medical store means something very obvious: the marijuana will be different.

What the hell does that mean? Will people be synthesizing it? Will people be stuffing additives? Messing with the genes? Will corporations like AstraZenaca, Merck, Or God Forbid Alex Gorsky of Johnson and Johnson, get their hands on a legal “right” to “produce” and distribute Marijuana?

The future of this is uncertain. I don’t want my Marijuana mass produced. I don’t want it labeled for anything. I don’t want yet another natural thing turned into something unnatural and toxic.

Support your local dispensaries, if you support MMJ. Start now because things will get out of control. Just like I called Trump becoming President if Carson dropped out (they needed to be able to cancel out each other’s stupidity, and I was counting on that to be the downfall for both candidates) I’m going to call this MMJ another poppy-seed to heroin to Suboxone story. Another mineral to carbonate to liver failure story.

Take advantage of the fresh stuff while you can.