That doesn’t sound right. Beat a dead horse with a stick?

I hate to be the one to beat this subject over the head (that’s better, right?) but because it is mental health related and because I’ve some how become a regular, contributing blogger of such savory issues, I must speak.

It’s like learning to raise your hand when you want to talk in Kindergarten.

There are people in the world who don’t know what 2 + 2 is, there are children who never really understand the concept of “taking turns” to speak in Kindergarten. But I have never met a human being on this planet who doesn’t understand that after you chew the food that you’ve just shoved in your face hole, you’re suppose to swallow. If you have, let me know in the comments.

I’m talking, of course, about that hideous article written by Amanda Lauren. Now I’ve seen a few of you have written on the topics all ready, the majority of whom I agree with, so I’ll do my best not to repeat the same opinion for those of you who also agree with those bloggers.

For those of you who have no idea what I’m talking and are about to click that exit button because you just realized my intro is a quick inner dialogue on stabbing dead animals and that makes you wary, Amanda Lauren is some kind of blogger who wrote an article for the website xoJane.com on how her former friend’s suicide was a blessing (Xojane has since removed the article and sent out a formal apology).

Amanda’s reasoning was that “some people are so sick, they are beyond help”.

Amanda had reconnected with this friend of hers in Los Angeles and got her a job. When her friend quit the job, their friendship fell apart again. Later Amanda looked her up on trusty old Facebook (Facebook: finding the friends you sorta, kinda, never really cared about since February 4, 2004) and quotes her posts as being “like the diary of a fourteen-year-old girl with an eating disorder from a Lifetime movie circa 1993.She talked about seeing doctors, specific meds, and being diagnosed with schizoaffective disorder.”

A mutual friend then mentioned the girl had committed suicide.

How ironic, a day after I get done talking about stigma and misunderstanding against schizophrenia spectrum disorders, this author comes out and slaps me across the face with the exact type of disordered thinking I slam on a daily basis.

Why do I say that? Well, because her friend suffered with this disorder, Amanda claims she is better off dead. She says her friends death isn’t a tragedy, her life was. She said “schizoaffective disorder robbed her of her potential” and “she was alone and terribly unhappy when she died”. She said there was no chance for her recovery without family or support. 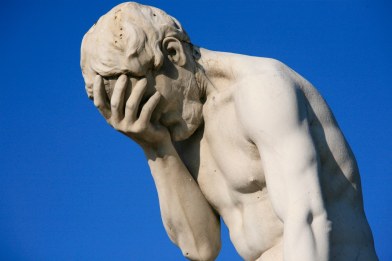 She wrote: “There was just no way she would have survived on her own. Drowning to death was relatively painless compared to what she had to endure in life.”

I will go at this gently no matter how hard I feel like ripping the hair out of my head.

The fact that someone who has obviously had no struggle with mental illness, someone who has obviously let a little internet success wipe away her common sense (she blogs for many websites, and has been on Psychology Today, check her website here.), someone who probably couldn’t even spell schizoaffective without the help of Google had the audacity to indicate to the mental health community that there are some people who are too far gone, that a disorder tarnishes the worth of your life, has to be about the dumbest person who isn’t Trump.

If you don’t have experience with it, shut up about it.

No one can deny schizoaffective disorder is a serious disorder. No one can deny it impacts functionality severely with or without treatment. No one can deny that’s not a hard life. But if everyone who experienced hardships of that level and greater had no worth to their life, 90% of the population would have no reason to live. I would have been dead a long time ago.

Now, what really pins the tail on the donkey of this story is that Amanda admitted, in the “essay” about falling outs with her friend and that her former friend had “blatantly tried to hook up” with some guy Amanda had a damn crush on.

Well, if you really care about something like that to the extent you feel the need to mention it in an essay you’re writing about a former friend from years past who committed suicide, than you really have a personal,  vindictive agenda here, don’t you? You like creating drama, don’t you? You’re subscribed to Nicole Arbour’s YouTube channel, aren’t you?

If this woman wrote an article for the sake of a “last laugh”, or a “ha, you had problems” than I believe I’ve now gathered enough evidence to prove there are some so-called “neurotypicals” who are more disordered than those of us considered disordered.

But I digress as usual. You should all be used to this by now.

The fact is, whether the woman wrote this article out of spite/high school drama or out of pure ignorance or because she doesn’t have a filter, this is a rampant issue in the mental health community.

Psychiatrists make good money. Many of them switched during medical school and have no background in psychology and no personal background in mental health. Does that mean they don’t care? Not necessarily. But it does mean they can only sympathize or pity, and never empathize. And that’s a problem.

I’m proud to not be one of those.

In fact, I’m proud of the mental struggles I deal with every second I’m awake. I’m proud I see the world differently: that gives me absolute certainty I will never think like Amanda Lauren or ever be associated with people who do.

Don’t let idiots with skulls as thick as kevlar is strong speak for us, because some of those idiots will see you as a liability. They’ll see you as lazy, pathetic, and worthless. And they’ll tell you. They’ll tell you so much you’ll believe it. We don’t need to lose someone else, we need you, all of us. So share you story and be proud of it, even the darkest moments or the most twisted psychosis.

The real tragedy here is that Amanda’s friend didn’t get the chance to see how much worth she really had.

*P.S Do not, I repeat DO NOT click on the link to Amanda’s website I provided and spam her with hate or opinions. That’s childish and petty.*

7 thoughts on “What Are You Worth?”