One of my greatest comforts in this world is food. I admit it. I’m spooning chocolate ice cream pie into my face hole as I type this. Contrary to what you would think, I’m not overweight. I have the knowledge of nutrition and exercise. I don’t stuff five thousand calories a day down my throat, I probably eat a little under than what I should. I will snack on almost anything and I will try almost anything. I have never been a fish person but I gave sushi a try at a birthday party and hacked it back up. So I learned I don’t like raw fish either.

Being where I live there’s a lot of different Mexican foods to try. For example, I learned they don’t put cheese on their tacos traditionally. 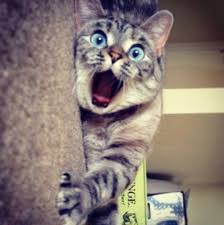 I know, overly excited cat, I was surprised too! After eating a million of them I finally realized hey . . . there’s no cheese on this. It’s not yellow corn tortilla either, it’s white tortilla with the meat and some cilantro and onions maybe, some type of salsa and you call it a day. They’re just as delicious with cheese as they are without cheese.

I like spice. And steak sauce. I put A1 on my chicken, on my fish (it makes it taste like real meat), on my steak, on my burger, whatever. A1 is the shit. Hot sauce is the shit. I want to sweat when I eat, that’s how you know it’s good to ya.

That being said, I never understood why no one in my tiny, Californian coastal town of mainly Caucasians and Mexicans had never heard of grits or hot water corn bread. I mean, I literally spent the majority of my high school years baffled. Just like they’d ask me if I’d ever tried Posole and at the time I was like I don’t even know what language you’re speaking and they’d give me a look like I’d just run over their whole family with a tour bus. I’d give them an equally confused look when they said “You mean .  .  . the muffins?” when I mentioned hotwater corn bread.

So let me fill you in. Hot Water Cornbread is not a muffin. Hence the “hot water” part. You take cornmeal and put it in a bowl. You boil water. You pour just the right amount of the boiling water into the cornmeal until it’s just enough for the cornmeal to suck up the water and clump together. Then you cup it in your hand and press it into a puffy hand shaped patty and toss it in a skillet to fry. My family usually fries with left over bacon grease or vegetable oil. When you google hotwater cornbread you get this little perfect patty all rounded and shit . . . fuck that, it’s meant to be handled with you hands with love put into it that you viciously fry away until the outside is a deep golden yellow. Then you slice it open and put some butter and munch out on it with some blackeyed peas, some mustard greens, some potato salad, and some baby back ribs.

That’s how I grew up.

Grits is also not a type of rice soup. I . . . I don’t even know where people come up with this stuff. It’s also a type of corn. It’s good with eggs and sausage and bacon and toast.

I could eat hotwater cornbread and grits with anything. It’s one of the reasons I want to visit the south where half of my family grew up. Hotwater cornbread started with Native Americans (in the southern region like Tennessee and Mississippi and such) frying these concoctions on the iron skillets from the new comers. I would love to walk into a restaurant for once and order a plate of what I grew up with, surrounded by people who also grew up around the same, with people I might actually be able to relate with.

I love Mexican food, I love burgers, I love curry, I love vegetables, I love fruit, I love grits, I love hotwater cornbread, I even have learned to love the fish Tilapia. I used to fish for crawdads and kept one as a pet. I watched my father clean fish a lot. We went fishing often when I was younger. I love gumbo, particularly the crab and sausage kind even though I don’t even like crab. Haven’t tired the one with fish head and brains in it, not willing to go that far. I’ve also never eaten pig feet or hog head cheese. I guess you could say I’ve been westernized.

I love everyone and I love them even more when I try their food and it’s good.

I don’t like when people try to push cultures on me. I know I’m all jumbled together, but that’s who I am. I’m not going to become “white” and eat hotdogs and hamburgers all day, I’m not going to become Mexican and eat tacos and fish and I refuse to drink grape soda and munch out on fried chicken just because you think I need to be more black. Just let me be who I am. Why is that such a hard thing for people to do?