I wasn’t feeling good today. I hate having no energy and feeling so useless. I cleaned the bathroom and the kitchen (at least that dog is gone so no more hair or vomit), so I guess I’m not completely useless, but I’m still feeling like a failure. I can’t wait for this depression to pass, it’s really putting salt in my game. And my game was already shriveled up as it is. Rather than deal with that, I ate some chocolate, smoked a little relaxation and, of course, started reading about aliens.

I’m sure everyone’s heard about the object circulating around some star. It’s got an irregular pattern or something, so it’s not a planet. Honestly, as much as I love science, I didn’t read the articles, I just skimmed them and got bored because my mind doesn’t really feel like thinking about a lot right now. Instead, I found these ufo shaped clouds:

Beautiful, aren’t they? It just helps remind me how amazing life is.

There is only one real disadvantage I see being alone and up all night.

I just lied straight through my teeth. Let me start again.

There are only two real disadvantages I see being alone and up all night.

That about sums up my night tonight–or early morning, whatever you want to call it. If I were still focusing on my classes I’d probably be up scrambling for my test that would have been today. Instead, I’m sitting here unable to sleep thinking about the fact that I’m unable to sleep. How droll.

Driving down the road at two in the morning is nice because there’s no traffic. It sucks because I’m paranoid about every set of headlights behind me, every set of headlights coming at me, and I’m paranoid that someone, or some thing (I don’t even like typing that because I know it’s watching me type it) is sitting in the back seat. Today it felt like the front seat.

My boyfriend’s room has motion sensor lights so whenever it goes out I freak and do some frantic jumping jacks so we’re not left alone in the dark. I always feel like things are in his room too. I’m starting to think either I’m being followed by it or I’m just tripping balls. Those are really the only two options.

Then here comes my dad’s friend leaving his damn dog with us for four days. It’s a tiny thing and cute: 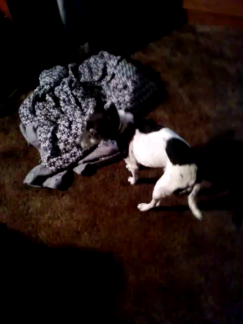 However, she is incredibly old and apparently has to deal with a lot of crap at my dad’s friend’s house. I don’t know the whole reason why she’s been with us for four days, but it’s taking a toll on her. She’s scared. She shakes. She shakes then she vomits. When she pees all over the place. Then she vomits some more. Then she sleeps all day. Then she vomits again. Then she eats. Then she scratches. Then she does some weird ass thing with her mouth by opening it and kind of trying to crack an imaginary walnut lodged in the left side of her mouth. We don’t know why she does this. But there must be something wrong with that side of her, because she’ll drag the left side of her face across the carpet and whine. I don’t know man, she’s not our dog, we can’t do anything for her.

He needs to take her back. We’re not even supposed to have animals in this fucking apartment.

Apartment number 6, the new managers since the old one got fired, “has their eyes and ears open”.

I’m not kidding. The landlord sent a message out telling people not to store their stuff on the balconies of their apartments (where the fuck are they going to put their stuff?) and then added that “apartment number 6 has their eyes and ears open”.

We have a history with this management. Years ago they evicted us because some on-site manager was a bitch and complained about us. She was a drunk and a drug addict and although my dad helped her out with a lot of things, she stabbed us in the back because they got in an argument one time. Anyway, we took to sleeping in tents, rooms of other people’s houses, and hotels for three years until we moved into this place. Back then it was owned by a different management. They were cool, the rent wasn’t too bad, they didn’t do a credit check (which was the whole reason my family couldn’t find a place to live) and they didn’t come around much.

Then they got bought out by the same management company that kicked us out all those years ago. So they know us very, very well. And we walk on thin ice with these people. So if #6 decides to flap their fucking lips about apartment #2 having a dog, well we’ll be royally fucked, won’t we?

Not really. I doubt they’d make a big deal about it. But they could, that’s the problem.

Anyway, I don’t particularly like authority, remember? So the fact that #6 were stuck up assholes before they became stuck up managers makes me despise them even more. I don’t want those people to have control over me. I’d sock that bitch right in her face if she came up and tried to tell me something.

I’m sorry; it’s late, I’m sick of not being able to sleep, I’m tired, and honestly I could go for a good fight. It’s a great way to release pent up energy. I need a punching bag.

If I could fucking sleep, I’d be sleeping all day. I’m not unsatisfied with sleep.