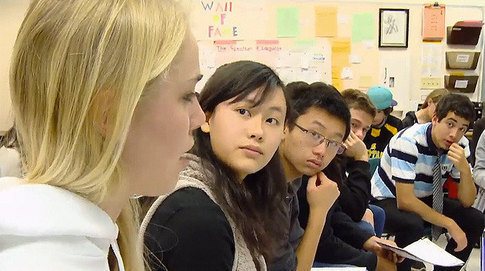 If you have social anxiety disorder, there’s a very particular phrase that I’m sure teachers and professor alike say that you and I hate equally:

“Feel free to ask any questions”

What does that even . . . mean? How do you feel free to ask a question? If someone has a secret for it, I’d like to know; I’ve been trying to do that for years.

If you have social anxiety disorder and you’re in college and you experience any of the aforementioned (or any equivalent), than you probably have a very clear understanding of how hard it can be to speak and think at the same time.

I’ve gotten better since high school, but still encounter moments when I struggle in composing my thoughts and stutter like a first grader trying to read The Odessy by Homer.

Regardless, it’s Thursday night currently and you know what that means: I had my Native American Literature class, so here comes a mess of thoughts.

The thing about this class is the very feeling of it encourages participation. In grade school dread always washed through me when I heard that word. It still does, I just choose to ignore it. The same goes for the phrase “Well, here’s what we’re going to do” and “this should be fun”. Both of those phrases are notorious for preceding a group activity or class-wide participation that would torture me for an hour or so.

But my professor in this class never uttered the words “participation”, although we often break into smaller groups for discussion and then discuss as a whole class. Now I’m not thrusting my hand in the air and being a know it all like I could be, but if I got randomly called on I can tell my anxiety would be lower than usual. The aura of the class demands respect, it encourages it, and it nourishes it. Even when I get people staring at me I can more easily brush it away. Because whether or not they think I’ve said something stupid or think I look stupid or sound stupid or whatever, the aura of the class squanders whatever power they might put in their judgement.

Whenever we finish a paper, about every other week (the class is only once a week for three hours), we form groups and read them allowed. Mind you, this takes a while as each paper is 7 pages plus. One girl kept staring at me. We were all in a circle. She sat across from me, started writing in her notebook, and rested her chin on her hand and directed her eyeballs right at me. I’m not joking. Then she started writing again. Now, I’m not paranoid but . . . the fuck you writing about me?

Anyway, I let it slide. I read my paper last, of course, and all the other groups had already finished. The professor started wandering around telling them that I “have some great things to say” and that they should listen to me too. So he had me start over reading my paper aloud to my group of four (not including me) and another group of five. Then, I heard the shuffle of other footsteps. The rest of the class ( a huge group that was reading outside) came in and were instructed to listen as well. So I basically read my eight page paper to the entire class.

I don’t mind that at all; reading my words off a paper is easier than trying to explain my thoughts orally. If anything, I take it as a huge compliment. If there’s one thing us people with Social anxiety disorder think, it’s that what we say is irrelevant, that what we say is dumb and no one would ever care to listen. Whether these people were forced to listen or not didn’t matter to me; the fact that the professor acknowledged my words only reminds me my thoughts are valid. That’s something I’ve never experienced in a class setting.

I’ve had teachers compliment my writing, that’s nothing new, but to have it shared in a community like setting, and for it to be appreciated–that’s something they don’t stress in public education very often. Not here, at least.

And don’t you even worry about it; if you’ve been reading my posts for a while you know I’m very outspoken about mental health and when I can find a way to weave our struggles into something available to the general public, I do it. And I did it tonight. There were a few pieces we read that used “schizophrenic” as a way to describe the split mind of America, which is really one of my pet peeves. Of course, the use of the term was relevant in this woman’s book so I didn’t argue it. Instead, I transformed the metaphor she used and manipulated the words with a real life example that reminded whoever the reader (or listener) of my paper was, that this disorder isn’t just a word.

I talked about my own struggles too. Afterwards a woman came up to me and thanked me for writing those struggles, as she’d experienced much of the same in her life. And as I walked to my car I realized how often people stay silent about mental health just as they stay silent about Native Americans. And I realized I’ve never been ashamed of my anxiety, of my depression, of my twisted way of thinking, unless people gave me a reason to be. Even as I read my paper, I got a queasy feeling in my stomach–because, shit, they’re going to start thinking I’m crazy.

Why is it taboo to talk about this? Why are we getting messages that we should be ashamed of how we act, that we need to fix who we are with all these treatments, with all these methods?

All I have to say to that, is this: Get the fuck up out of here with that shit before I fix your face; it’s looking a little stupid.

My professor told a story of a friend of his who is Apache and how he applied to a Christian University to get his degree to be a drug and alcohol counselor. The board woman loved his record and wanted him to attend but said . . . “well, you have to be Christian to go here.”

She said, “Well, why don’t you go pray to your deities and see what they think about you converting to Christianity while you’re coming to our university.”

He went and he prayed and he came back. He said, “I prayed. I am who I am. I can’t do what you asked of me.” He continued with “Now since I did that, I want you to go home and pray and I want you to see what Jesus Christ would say about me attending this University.”

She went home and she prayed.

She called him and she said, “You’re accepted”. And she approached him and said “Thank you, young man, for reminding me what it means to be a good Christian.”

Normal is who you are. That’s normal for you.

The same man applied for a drug counseling job on a reservation. They loved him. When they asked for his card (You have to have a card to be considered truly Native American to the U.S government) he said he did not have one. They said he needed one. He said he will never get one. They went back and forth for a while. He told them “are you free people or are you dictated by the laws of the government?”

Reservations are supposed to be a sanctuary where people are free to live how they have for thousands upon thousands of years on this continent. Yes, thousands of years. If you live in America, millions of people stood where you stand before the year 1492.They kept it clean, proliferating with vegetation, and otherwise untarnished. Appreciate that fact.

Anyway, they wouldn’t hire him.

Two months later they had reconsidered and called him for the job.

They tell you that you don’t have that right, but you do.

Doesn’t mean you should.