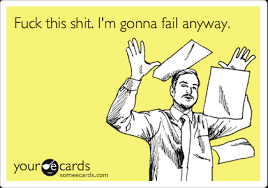 I didn’t go to class this morning.

I have another class in an hour and a half and I don’t think I’ll be making it to that one either.

Last night I felt pretty wired. I couldn’t focus, my thoughts scurried from one thing to another. I didn’t sleep until one thirty and woke up at four am to find my mother standing in the middle of my room wondering whether or not she should wake me up. My father had to go to the hospital after experiencing another suspected TIA (Transient Ischemic Attack; a mini stroke.) He’s had several of these in the past because of his high blood pressure and drinking. Although the TIA subsided by the time the ambulance arrived (as opposed to him trying to open the front door thinking it was the bathroom and then crawling around in circles on the floor) but they took him because I’m sure his blood pressure was in the 200’s, yet another common occurrence. He doesn’t take his medication regularly when he gets into drinking again, that’s one of the main issues.

Anyway, that’s a monthly occurrence in this house hold, I’m just glad I didn’t have to deal with it this time. Usually I’m the one nursing him back after a seizure or calling the ambulance while keeping him from running out into the streets during a TIA or confusion from high blood pressure.

For any addicts out there, he is a prime example of what your body will be like when you’re 56. He’s skinny as hell, rarely eats, has lost the majority of his teeth, has had multiple seizures, enough to destroy his attention span, his mood regulation system, and his short term memory. If you’re having a conversation with him, he’ll forget it’s purpose in thirty seconds. He has high blood pressure, kidney failure, and congestive heart failure. He had a small heart attack about nine years ago, at 47. His eyes are yellow. At one point he was on 13 different medications and fainting every other day. Sometimes he can function, other times he sleeps for days on end. And if a friend offers him a drink (it’s the only way he can get alcohol now) he’ll still take it.

He’s done other drugs in his past, which contributes obviously.

At any rate, my mother left at 4:30 am to go to the hospital. I watched some YouTube videos before I decided I should probably try and get some sleep. So I turned over, faced the wall, and shut my eyes.

I have sleep issues. Not because I wasn’t tired (which is an issue in itself) but because I’ll get stuck in sleep limbo, seeing things that aren’t there, hearing things that aren’t there, and then eventually having some weird ass dream you could probably spend hours interpreting. While I was watching YouTube I kept hearing whispers, incomprehensible ones, of which I am used to and simply brushed off. But when I turned on my side and was balancing between falling asleep and still being awake, I saw these weird flat bugs, like a termite but ten times larger, and some other ants squeezing themselves through the walls in the corner across from my face. They were literally seeping through the wall. I freaked out, turned on my other side, and started watching YouTube again. Then I got paranoid thinking someone was hiding in my closet, a shadow, a demon or some shit (dude I don’t know, my brain is weird) and I freaked out a little more before finally falling asleep.

I had a dream about spiders and ants seeping through all the walls.

I awoke an hour later, pissed off at the world, not tired, and not ready to get back the F I probably got on my Calc test. Okay it was probably a C, maybe a B, but those are both F’s to me.

I wanted to punch the walls and kick down the doors and break the windows and scream and let whatever monster loves to claw so mercilessly at my skull take charge.

Instead, I tried getting ready, I really did. I was telling myself “it’s just class, you can make it through like you always do”.

But I’ve lost a lot of motivation these last two semesters. I’ve considered dropping out. At least until I get myself together. I can’t focus, I can’t guarantee that I can finish any of my work, and I can’t predict my moods. Class is an added stressor I’m not sure my body can take anymore.

I’m sick of faking that I’m alright. That thought kept circulating through my head this morning and I fell into another depression. I still took a shower, I still got myself ready, but I was sitting in my car until 9:18 and my class started at 9:30. It takes at least a half an hour to get to my campus. I just wanted to drive my car off a cliff or speed into another passing car. So I didn’t put the keys in the ignition.

I also couldn’t think straight. My thoughts were all over the place, self-destructive, and uncontrollable. So instead I sat in the car and contacted lifeline.

My boyfriend and my mother found me as a crying mess in my car and my mother asked me if I was okay. I finally, for the first time in my life, told her no.

That’s fucking stupid. Even reading it over, it sounds like a straight up dumbass wrote it.

So I just cried and sat in my car. Went to Rite-Aid with my boyfriend. Chatted with Lifeline. Came home. Laid on my bed for the next four hours and now I’m here, writing about how fucked up I am.

I know I blog about suicide awareness. I talk all these positive things because I don’t want people to experience what I do. I’d rather them get the help, they’re worth it. I’m not and I know that. I’d rather save 100 lives than my own.

That being said, I hope whoever reads this has a wonderful day. You deserve it.