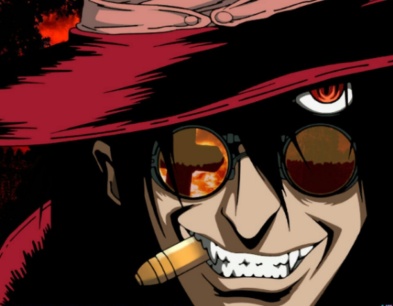 I pretty much use the name “Alucard” for everything I’ve ever been apart of online, lest it be business related which . . . uh, never happens. I’ve wondered for so long why people thought I was a fan of anime. I . . . I hate anime. Okay, I don’t hate it, but it’s never struck me as cartoon genius. I can never catch the stories from the beginning so I come in like what the fuck why is there a floating teddy bear following that person and why does it puke rainbows? I don’t know. The animation bothers me too. Yes, it’s because of their mouths. They’re like triangles and they move like triangular mouths would move. I actually like the over size eyes and all that fancy stuff, but when it’s out of sync with the English over-dubs it’s just . . . it’s a pet peeve of mine. I’d prefer to watch it in Japanese. I can’t even stand it when English video is out of sync with English audio.

Anyway, I borrow “Alucard” and “AlucardEverlasting” from a song called, well, Alucard by Tech N9ne. It’s a song I go to when I feel on top of the world, when I’m sure I can conquer anything in my path and when I’m sure everyone else is writhing below me in their stupidity. Whatever. I just love that line: “All these stars never last, yet I will still stand while everyone’s passing”; yes, it fuels my crazy ego when it gets out of control. I think it’s worth pointing out it wasn’t until Tech literally said “read it backwards” in the song that I saw it spelled Dracula. Just thought I’d point out how smart I am.

So I googled the name after I noticed a lot of other people used the name too. Apparently Alucard is the main protagonist of the “Hellsing” anime/manga series. He’s a “Transcendent Vampire”, whatever the hell that means. I guess it’s different than a normal vampire, because he’s a part of the “Hellsing Organization” which works against supernatural forces like Vampires. I have to admit, reading about it hooked me and when they said he is apparently the “most powerful vampire” I grew giddy. Maybe Anime isn’t that awful after all, eh?

I love how the website I read denoted one of his pictures with “Alucard’s twisted side”. I totally have a twisted side! How completely relative to my life is that! Is it bad that I laughed at the fact that he rarely kills his victims by shooting them unless he’s totally disabled and humiliated them? My dark side is humored by his malice. I’m not even immortal or invincible, and I’m egotistical like this dude. Taunting and belittling an opponent? My pleasure. Break an opponent rather than kill an opponent? My greater pleasure.

Now, before I make myself out to be some kind of psychopath, it’d just like to say I don’t actually have opponents and I never break people. I’m also not a Transcendent Vampire. Unless someone makes me angry. Then I’m a God and I will go after their ass. So just . . . don’t make me angry.

Besides, Alucard’s got quite an honorable personality underneath all that arrogance. He respects humans who have the willpower to go through old age and death. I read he wants to be killed by a mortal because “that which defeats a monster is always a man”. I’d say that’s fairly accurate, especially since monsters are created by man in the first place. This made me dislike anime a little less. I have to admit, the characters are pretty much always developed with depth, the story lines are crazy, and the adventures are wild and I like that part of it. But I had a traumatic experience with Manga. I opened the book like a normal fucking book and everyone was like “YOU’RE READING IT BACKWARDS” and I’m like “I’M SORRY THIS DOESN’T MAKE SENSE” and that was another shining moment of my genius. I stay away from Manga. But I’d be willing to give Anime another chance. I love the creativity.

I’m always attracted to these kinds of characters because I think they embody what it means to be human better than humans do. We all have a dark side. I know mine is fairly intricate, arrogant, sophisticated, angry, and quite manipulative when she wants to be. She’s my guardian. When I’m out in the world and I’m hurting, she protects me. Sometimes it’s at the expense of others and I feel guilty afterwards. But I take advantage of my dark side whenever she arises, however she arises, because she’s powerful and unashamed. She could do whatever she wants and I get to ride along with her, pretending I have the same amount of self-esteem she has. I guess she’s my alter-ego. I don’t know what you call it, all I know is that I’d be lost without her around. We’d all be lost without our better halves.

Hello darkness, you piece of shit. I was wondering when you were going to sneak up behind me and put me in a headlock. It’s been a while. Usually I’ll get a little warning, maybe a day or so of light sulking but I guess that game is all over. He means business now.

I swear there are little people in my head. Not voices, I mean literally little people. Like that movie Inside Out or whatever. And whenever they fight I’m stuck being launched into space or slammed into the ground or smothered in fire. There were so many thoughts I didn’t feel were mine scrambling around like crazy this afternoon. They cried for my help but what the hell was I supposed to do? I’m stuck out here, they’re stuck in there, what’s the point of asking me for help? I’ve been fighting with them for too long, they need to leave or I need to leave.

I’m the first person to stand up proud of myself and the unique parts of my brain. Doesn’t mean I enjoy it, not like this. The twelve hour naps are nice I guess.

I can’t write or think when I’m monotonous. I don’t know why I’m posting this since I can barely gather my thoughts. If I had insurance I’d be the first person shuffling into the halls of the hospital and making them feed me and drug me up and shit so I don’t have to take charge of life out here. Classes start in two weeks.

Yeah, I’m fucked. Nothing new in this neck of the woods.